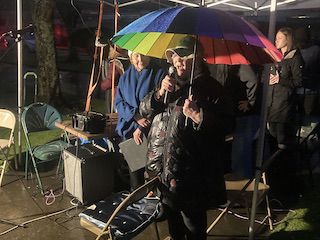 From The Tacoma Weekly: Ukraine continues, a candlelight prayer vigil was held at Thea’s Park on Monday. Organized by Tacoma Sister Cities Committees for Brovary, Ukraine, and Vladivostok, Russia, people stood shoulder to shoulder in the park’s Peace Plaza despite the pouring rain, next to the world globe and recently installed Peace Pole that bears the message, “May Peace Prevail on Earth” in 13 languages. Last week, Tacoma Sister Cities released its official statement: “Tacoma Sister Cities is fortunate to have warm city-to-city and personal relationships with the people of both Brovary, Ukraine and Vladivostok, Russia. We are deeply saddened by Vladimir Putin’s invasion of Ukraine. We care for people in each country, for our friends and families in each country. And we stand in support of a people’s right for self-determination. The mission of Sister Cities is to work for peace among all peoples, one nation, one person at a time. The work is not always easy, but it is what we do.” Numerous people spoke and offered prayers at the vigil. Tacoma Sister Cities President Clare Petrich acknowledged the historic suffering that occurred where the vigil was held and in other parts of Tacoma – oppression of the Salish people, the Chinese forcibly expelled in 1885, the Japanese rounded up and interned during World War II, and the Black population in Hilltop that continues battling racism and their right to exist. “I think we are in the right place for us tonight to honor and speak for the proud and committed people of Ukraine and particularly the friends that we know and love from Brovary,” Petrich said. In an earlier interview with the Tacoma Weekly, Petrich noted that it makes a difference when you have shaken hands with or given a hug to people now trapped in a warzone. “In a situation where you know and have friends and have met people in your Sister City, war takes on a very different appearance. It really is about people. It’s hard,” she said. Stan Sayenko, son of the late Pastor Peter Sayenko of the Slavic Christian Center in Tacoma, remembered stories his father and grandmother told him of earlier wars. “In 1941, Ukraine was invaded by Germans. Hearing stories from my father, Peter, and from my grandmother, who lived here in Tacoma and has passed as well, I heard about how the men from the villages, without any arms and just pitchforks, hammers and shovels, went to defend their country…, their homes. Read the full article on the Tacoma Weekly website: https://tacomaweekly.com/tacoma-stands-with-ukraine-p2792-117.htmhttps://tacomaweekly.com/tacoma-stands-with-ukraine-p2792-117.htm Photo: Tacoma Weekly
Share
Tacoma Mayors Meet the World
Help us Help the People of Ukraine