Join us as we learn about our Sister City Aalesund cultural identity through a book from its country, Norway. All while snacking on delicious treats inspired by international cuisine!
February book:
Ashes in My Mouth, Sand in My Shoes by Per Petterson
Book link
Description: The heartwarming debut that brought Per Petterson, the author of the highly acclaimed Out Stealing Horses, to prominence
Young Arvid Jansen lives on the outskirts of Oslo. It’s the early sixties; his father works in a shoe factory and his Danish mother works as a cleaner. Arvid has nightmares about crocodiles and still wets his bed at night, but slowly he begins to understand the world around him. Vivid images accompany each new event: A photo of his mother as a young woman makes him cry as he realizes how time passes, and the black car that comes to collect his father on the day Arvid’s grandfather dies reminds him of the passing of his bullfinch. And then, one morning, his teacher tells his class to pray because a nuclear war is looming. Ashes in My Mouth, Sand in My Shoes, Per Petterson’s debut, in which he introduces Arvid Jansen to the world, is a delicate portrait of childhood in all its complexity, wonder, and confusion that will delight fans of Out Stealing Horses and new readers alike.
Author: Per Petterson is the author of books including In the Wake, To Siberia, and I Curse the River of Time. Out Stealing Horses has won the IMPAC Dublin Literary Award, the Independent Foreign Fiction Prize and the Norwegian Booksellers’ Prize. The New York Times Book Review named it one of the 10 best books of the year. A former bookseller, Petterson lives in Oslo, Norway.
Animator of the Book Club: Hunter White. Learn more about Hunter here 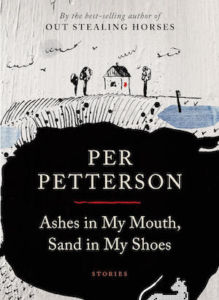