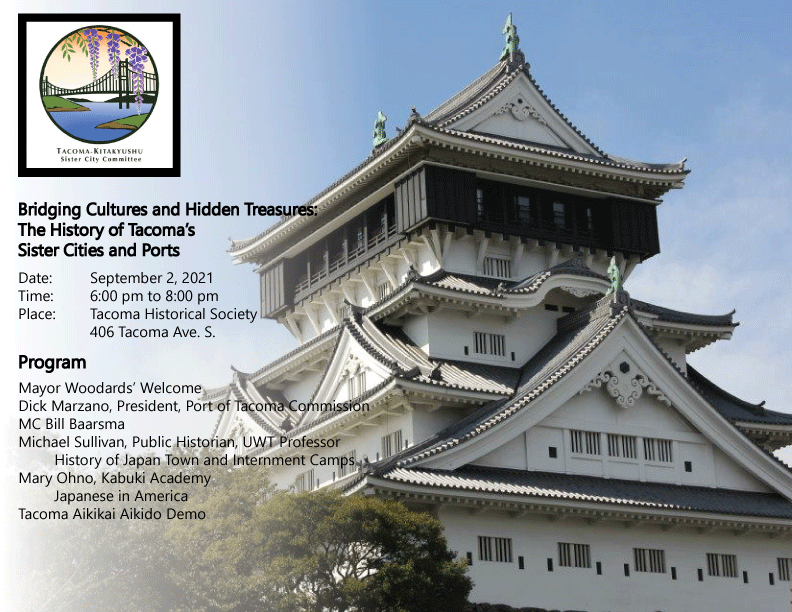 We are happy to announce that Tacoma Sister Cities has partnered with the Tacoma Historical Society to bring to you an exhibit of Tacoma Sister Cities’ 62 year history and gifts:
“Bridging Cultures and Hidden Treasures: The History of Tacoma’s Sister Cities & Ports”
The Exhibition opens on September 1st with a reception and program on September 2nd at the Tacoma Historical Society Museum located at 406 South Tacoma Avenue.
The Sister Cities Exhibition will be open until January 5th, Wednesdays through Saturdays, 11 am to 3 pm.
The schedule for Sister Cities Events is :
The theme of Sister Cities & Ports Receptions is Transition between Cultures: Exploring Immigration Stories in Tacoma.  Many of our committee members were born in other cultures and settled in Tacoma. These events will open up opportunities for people of many cultures to share their immigrant stories.
Sponsors are City of Tacoma, Port of Tacoma, Tacoma Creates, Pierce County, Fuchs Foundation, Kilworth Foundation,WA arts.

Sylvia Sass, recipient of the Tacoma Historical Society’s prestigious 2021 “Star of Destiny Award
Sylvia Sass, an original founder of Tacoma’s Sister Cities Program, is the recipient of the Tacoma Historical Society’s prestigious 2021 “Star of Destiny Award” given in recognition to the community’s most notable and accomplished history makers.
The award was announced at the Historical Society’s grand opening of the dual exhibits: “Hidden Treasures: The Stories and Treasures of Tacoma’s 60 Years of Sister Cities and Ports” and “Timber Town.” The exhibits are open to the public Wednesday through Saturday 11-3. The Society’s Museum is located at 406 Tacoma Avenue South.
In 1956 Tacoma Mayor “Big John” Anderson had just returned from a White House Conference on Citizen Diplomacy organized President Dwight Eisenhower and needed a local leader to head up the effort to establish a Sister Cities Program. He turned to Sylvia to make it happen – and indeed she did. Described as being “resolute,” “articulate” and having a “can do attitude,” she headed up a powerhouse team that began the organizing effort.
Kitakyushu, Japan became Tacoma’s first Sister City with the relationship established in 1959. Twelve cities in different countries have followed with a city in Italy and Croatia now under consideration. Citizen “diplomacy” over the years have included countless cultural and educational exchanges as well as economic development activities.
Sylvia’s commitment branched out from Tacoma with her appointment as the Washington State Coordinator for Sister Cities International. One of her most memorable moments was being selected as one of twelve national leaders to meet with President Eisenhower in 1968 to discuss the future of the Sister Cities Program. Since then, Sylvia has been recognized with a medal of service from the Emperor of Japan and a lifetime achievement award from Sister Cities International.
Sylvia joins a list of Star of Destiny recipients that includes, in part, Congressman Norm Dicks, Dr. Dolores Silas, House Speaker Laurie Jinkins, Port Commissioner Clare Petrich and State Auditor Pat McCarthy. Learn more about past recipients of this and other THS awards here: www.tacomahistory.org/awards
Alan C. Mason, Tacoma’s greatest promoter, used the Star as a way of branding and promoting Tacoma during the 1890’s when the City was described by Rudyard Kipling as the “boomiest” of the boom towns.
You can also read the article about Sylvia Sass on the Sister Cities International website

Share
Sister Cities Rainiers Night was a success!
Ironman for a cause