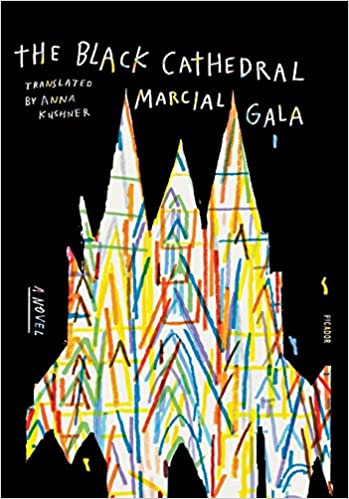 Discover The Black Cathedral by Marcial Gala: haunting and transcendently twisted, this English-language debut from a Cuban literary star is a tale of race, magic, belief, and fate.
Join us on August 9 as we learn about our Sister City Cienfuegos cultural identity through a book from its country, Cuba. All while snacking on delicious treats inspired by international cuisine! Check our book club page !
This month book:
The Black Cathedral by Marcial Gala
Book link

The Stuart family moves to a marginal neighborhood of Cienfuegos, a city on the southern coast of Cuba. Arturo Stuart, a charismatic, visionary preacher, discovers soon after arriving that God has given him a mission: to build a temple that surpasses any before seen in Cuba, and to make of Cienfuegos a new Jerusalem.

In a neighborhood that roils with passions and conflicts, at the foot of a cathedral that rises higher day by day, there grows a generation marked by violence, cruelty, and extreme selfishness. This generation will carry these traits beyond the borders of the neighborhood, the city, and the country, unable to escape the shadow of the unfinished cathedral.

Told by a chorus of narrators—including gossips, gangsters, a ghost, and a serial killer—who flirt, lie, argue, and finish one another’s stories, Marcial Gala’s The Black Cathedral is a darkly comic indictment of modern Cuba, gritty and realistic but laced with magic. It is a portrait of what remains when dreams of utopia have withered away.

Author: Marcial Gala is a novelist, poet, and architect from Cuba. He won the Pinos Nuevos Prize for best short story in 1999. The Black Cathedral received the Critics’ Award and the Alejo Carpentier Award in 2012 and was published in English translation by FSG in 2020. Gala also won the 2018 Prize of the City of Buenos Aires-Clarín for his novel Call Me Cassandra. He lives in Buenos Aires and Cienfuegos.

The daughter of Cuban exiles, Anna Kushner was born in Philadelphia and has been traveling to Cuba since 1999. She has translated the novels of Norberto Fuentes, Marcial Gala, Leonardo Padura, Guillermo Rosales, and Gonçalo M. Tavares, as well as two collections of non-fiction by Mario Vargas Llosa.