Please join us as we learn about our Sister Cities cultural identity and history through books from their countries, while we snack on delicious treats inspired by international cuisine.

We will meet again on the following dates at 6:30 pm at King’s Books

Check our Book Club News section below for more details on each meeting and book. 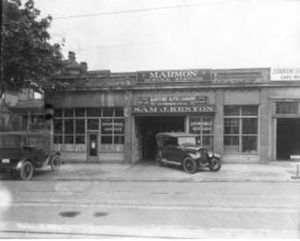 Photo of building circa 1919

King’s Books is a community-oriented bookstore with 4500 square feet and approximately 100,000 books. We have an array of events weekly, from book clubs to author events, community gatherings to our annual letterpress festival. We opened on April 1, 2000 and have become the largest used and new independent bookstore in the Tacoma area. King’s Books is a proud member of the Stadium Historic District Business Association, the Pacific Northwest Booksellers Association (PNBA), and the American Booksellers Association (ABA).

King’s Books is owned by sweet pea Flaherty, who took over the bookstore from John Schoppert and Pat McDermott in 2010. sweet pea has been a bookseller since 2000, starting at McDermott Books and A Room of One’s Own Feminist Bookstore in Madison, Wisconsin. sweet pea moved to Tacoma to work at King’s Books in 2003.

Check their website and order your books or come visit! 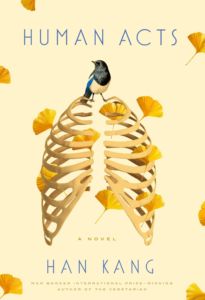 Description: From the internationally bestselling author of The Vegetarian, a “rare and as
tonishing” (The Observer) portrait of political unrest and the universal struggle for justice.

In the midst of a violent student uprising in South Korea, a young boy named Dong-ho is shockingly killed.

The story of this tragic episode unfolds in a sequence of interconnected chapters as the victims and the bereaved encounter suppression, denial, and the echoing agony of the massacre. From Dong-ho’s best friend who meets his own fateful end; to an editor struggling against censorship; to a prisoner and a factory worker, each suffering from traumatic memories; and to Dong-ho’s own grief-stricken mother; and through their collective heartbreak and acts of hope is the tale of a brutalized people in search of a voice.

An award-winning, controversial bestseller, Human Acts is a timeless, pointillist portrait of an historic event with reverberations still being felt today, by turns tracing the harsh reality of oppression and the resounding, extraordinary poetry of humanity.

Author: Han Kang was born in 1970 in South Korea. In 1993 she made her literary debut as a poet, and was first published as a novelist in 1994. A participant in the International Writing Program at the University of Iowa, Han has won the Man Booker International Prize, the Yi Sang Literary Prize, the Today’s Young Artist Award, and the Manhae Prize for Literature. She currently works as a professor in the department of creative writing at the Seoul Institute of the Arts. 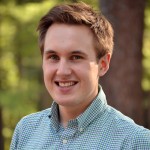 Hunter White moved to Tacoma in the fall of 2018 to pursue his interests in international business and trade with East Asian markets. Although originally a New England native (Connecticut, Vermont and Maine), he has worked and lived in several cities overseas including Taipei, Beijing, and Kunming.

Given his interests in various nations and cultures around the globe, he figured the Tacoma Sister Cities would be the ideal place to find like-minded folks in The City of Destiny.

This hunch turned out to be correct; soon after joining, Hunter was fortunate to receive the opportunity to begin organizing the Tacoma Sister Cities Book Club along with help from several key community members.

When not reading Book Club selections or indulging in trashy true crime novels, Hunter stays busy by serving as the chairman for the Tacoma-Taichung Sister City Committee. Outside of work and community involvement, Hunter stays active by playing competitive squash, harvesting wild shellfish, and tending to his vegetable garden.